For proof that Emile Hirsch is NOT gay, scroll below. But his Daft Punk video is very gay. 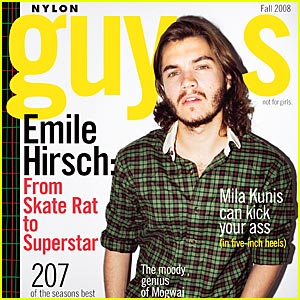 "A crew member on Emile Hirsch's movie Speed Racer is convinced the actor is gay after walking in on an awkward moment between Hirsch and co-star Kick Gurry. The pair was taking a break between scenes in a trailer onset in Berlin, Germany, when an assistant burst in to find Hirsch half naked and out of breath. Hirsch explains, "Me and Kick were in the trailer hanging out. Kick was sitting back with his hands behind his head, and I was doing push-ups. It was hot, so I peeled my driver's suit down a bit, and then Eric, the wonderfully gay production assistant, walked in. I jumped up really quick, but I was out of breath. Eric slammed the door shut. We went to Eric later and tried to explain. He was like, 'Shhhhh. I will never tell.'"