Like I needed another reason to dislike Donald Trump.

Besides the fact that he’s a megalomaniacal blowhard who wouldn’t know good taste and decorum if it smacked him upside the head, Trump has taken to talking about the size of his dick.

No, I am not kidding.

In the recent case of Jenna Talackova, the woman who was originally disqualified from entering the Miss Universe Canada pageant for being transgender, Trump — who owns the Miss Universe pageant and its international subsidiaries — backed down somewhat and has decided to allow Talackova to enter the competition. However, Talackova has yet to announce if she will join the competition. This doesn’t mean that she’s not pursuing her options, namely hiring uber-attorney Gloria Allred to represent her in legal matters and possibly planning a suit against Miss Universe and Trump. Allred spoke on behalf of her client, stating:

"Jenna entered this
competition and gave the pageant her time, her best efforts and her
money. She did not think for one moment that what she might have looked
like at birth would be relevant. She did not ask Mr Trump to prove
that he is a naturally born man or to see the photos of his birth, to
view his anatomy, to prove that he was male. It made no difference to
her. Why should it have made a difference to him?" 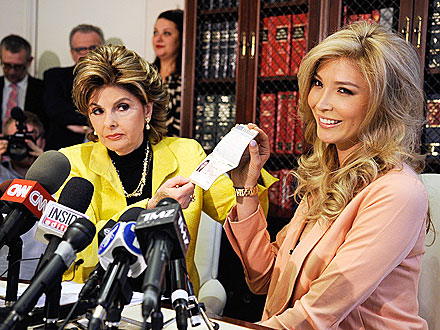 So what does Trump do at this comment? Opens his big mouth and starts talking about his own junk, saying that Allred would be impressed.

So here is a quick, simple and direct letter to Mr Trump:

Shut the fuck up.