Okay, so we’re not actually the only gays in the village. There are at least two other gay couples I know of in our wee hamlet. They keep a fairly low profile, but they are visible and known of in the community. We are certainly the only gay parents here, though, and it’s already making for some interesting interactions.

The village is quite small . . . really just one main street, with a convenience store (they call them dépanneurs here) and a grocery shop. There are also, mystifyingly, four antique boutiques within spitting distance of each other. Far more important than, say, a drugstore or a doctor but quite handy for any davenport-related emergencies that arrive in a well-appointed home.

There seem to be three prevalent theories buzzing about when it comes to our household configuration. The first is that Professor D has hooked up with some gigantic, ungainly red-haired amazon, eliciting sighs of heartfelt sympathy and admiration that he’s chosen such an unfortunate creature. Now, I say that as someone with a relatively healthy ego: I’m quite happy with how I look but also quite aware that I would make one seriously ugly woman.

Theory two is the most amusing of all, in that it acknowledges my correct gender but assumes there must be a little woman lurking at home while her shockingly effeminate but progressive man does the grocery shopping, mail-retrieval, child-pick-upping-from-daycare and all the other household duties usually foisted upon the fairer sex. Given that Pre-Schooler N is of mixed ethnic heritage (largely First Nations), I sometimes imagine that they see my “wife” as some housebound individual of indeterminate background, hiding away from the scary white folk.

The third is, well, not a theory at all: two gay men, living in the house on the hill, with an inexplicably tinted child. When this truth is revealed to the uninitiated, as it was with our kindly neighbour when she dropped by with a welcoming loaf of bread, the reactions are varied indeed.

Neighbour M showed up, a year after we moved in, offering apologies for her tardiness in welcoming us to the neighbourhood. “Oh, I spoke with your wife on the phone a few months ago. I volunteer at the library and reminded her that she’d purchased something at our auction.”

Now, given that I get ma’amed on a fairly regular basis by people who only see long red hair and a pale face, I am quite careful not to cause embarrassment. I smile, laugh a little, and let them know that it’s completely fine . . .  that lots of people just see the hair or hear my swishy voice and leap to the gender-appropriate conclusion. I have to admit that I do enjoy the ensuing blushes, the abject horror that they’ve (gasp!) impugned a man with any degree of femininity.

Not so Neighbour M.

I gently corrected her, saying it was me that she had spoken with, and that, due to my voice these things happened occasionally and were absolutely no big deal.

Um. Okay. So we move to the next echelon of potential humiliation, as I explain I have no wife. That my PARTNER and I live here and that HE and his family are from the area. I watch confusion collide with horrible certitude in a kinetic explosion of facial muscles that is almost alarming.

So here is where I leap out of the closet in all my glory, dragging Professor D and Pre-Schooler N with me as I lay out our lives for this complete stranger. I explain that our son is adopted and that we all live together in the house and that we’re so happy the village is such a warm and welcoming place.

Neighbour M is clearly conflicted. She’s been edging toward the edge of the steps since the beginning of my forced revelation and teeters there a moment before making her final retreat. She sputters a few half-hearted farewells as she beats a hasty retreat to her car, which she has driven approximately 30 metres in order to deliver what is admittedly a freakin’ heavy loaf of bread.

This whole exchange would be quite funny if it weren’t for my compulsion to explain the intimate details of my life — of OUR lives — to a complete and total stranger. Why do I care that she understand our particular family formation? Why did I need to use the word “adopted” when elucidating our son’s presence in our family? Why did I feel I should explain these deeply personal facts as though I was apologizing for causing her confusion?

Being a person who has lived with Full-Disclosure Syndrome most of my life (it’s totally a thing), I guess I don’t like leaving question marks when it comes to people trying to figure me out. I mean, people have been trying to figure us queer folk out for centuries, so I’m certainly not a special case.

Maybe it’s because we spend so much of our younger years hiding, deflecting notice and examination in case our friends and family discern our true nature while we’re still in a state of abject vulnerability — both materially and emotionally. It’s imprinted into our basic impulse to survive in a hostile environment. So when we finally exit the orientational closet (which was admittedly, in my case, one of those glass-fronted walk-in jobs that EVERYONE could see into), we can go overboard in declaring ourselves to the questioning. 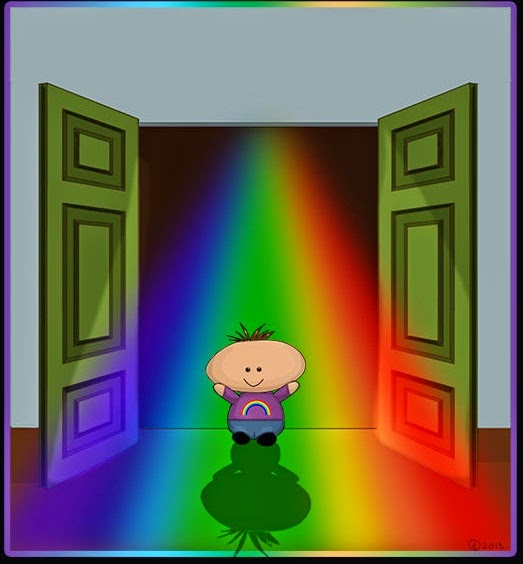 But surely, after all these years of honestly not caring if someone has issues with my sexuality . . . surely I don’t need to take so many steps backward in facing the world with the family I’ve created. My son deserves that. He deserves me to be as proud and unyielding in my role of gay parent as I am of being a gay man.

For fuck’s sake. Who knew there were so many damn closets that I’d have to climb out of in this world?