I've spent a lot of time over the past two weeks wondering what sort of
new fashion mutations are going to make an appearance next weekend at
the Parade. Gold lame hip waders? Homespun rainbow lioncloths? Your
guess is as good as mine. I do, however, promise here and now to high
five anyone wearing the following: 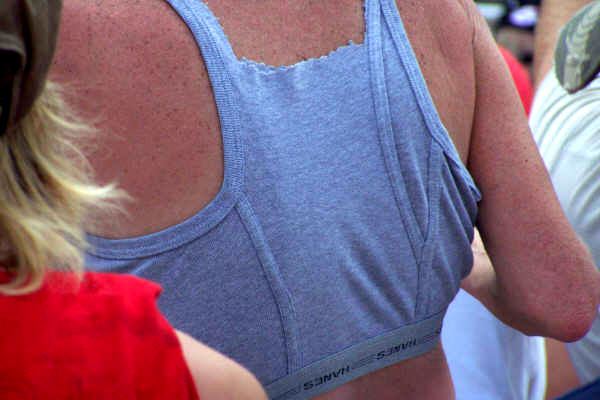 What
exactly is this? Hanes for her or Hanes for him? A pair of boxers?
Briefs? A brassiere? A tanktop? A T-shirt? A Boxtop? A T-Brief? A
shirtief?

Whatever. Take photos this week people. You know where to send them: vancouvergayblog@gmail.com.

Here's
a little love from Canada's own Tu. I love these girls and love this
song. I've been waiting for a remix to hit the clubs, waiting, waiting.
If you're game, make one and I'll post it on Right Up Your Alley and see if I can get you some exposure here in Vancouver.
And hell, if I see anyone wearing a zebra print skirt-suit this week,
their prize will be a guest spot here on RUAP. And if I see the Tu
twins wearing matching yellow raincoat dresses, we will have to elope
and make glorious gay pride test-tube babies that we can raise to be
cruel pop starlets who will, in turn, rule the Canadian music scene for
decades to come.

If you can't take it, skip the video to the one
minute mark and watch from there. As my blog counterpart in Toronto
puts it: Hotarious.

Never heard about Tu? Here's some background from their unofficial website:

Inspired
by the cantonese word for art, twins Amanda and Casandra DiBlasi
founded Tú in the mid 80's, after being discovered by producer and
former Red Rider keyboard player Steve Sexton when they appeared as
extras in a music video.

Regulars in the Toronto studio scene by
age 15, the twins had graduated from the Royal Conservatory Of Music
and had already appeared in numerous television commercials when they
started writing and recording their self titled debut in 1986 with
Platinum Blonde producer Bruce Barrow, to whom they were introduced by
Steve Sexton.

Released in late 1987 with RCA/BMG Music Canada,
the formerly titled "Siamese Kiss" album yielded two singles, the first
single being top ten hit "Stay With Me", which peaked at the 8th
position in November that year. A second single, "The Language Of Love"
was released in the first months of the following year, resulting in
additional sales of Tú and more tour dates through-out Canada.

In
1988, the twins left RCA/BMG Music Canada and embarked on their second
album, with a new label – CBS Records. Also produced by Bruce Barrow,
"Secrets In The Dark" was released the following year with two
moderately successful singles ; "I Used To Cry" and "Stop Breaking My
Heart". This was unfortunately their last album.