Lo and behold, I opened my vancouvergayblog@gmail.com account this morning and found this: 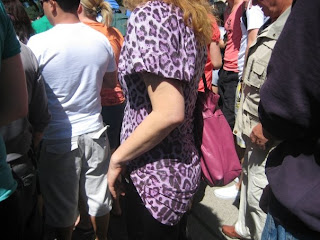 Oh loyal Right Up Your Alley readers. I love you so. I was told that this is not a drag queen. And I do believe my informant is correct. My eyes do not lie. Not as much as I'd like them to. Nor do they lie as much as they know they should. In any case, I'd like to take a walk down memory lane to a happier place in my life…

Once upon a time, when I was a boy, living on the cartoon veldt with Simba and my best friend Nala, King Mufasa's mystical hornbill advisor Zazu foretold that I would encounter one day in the distant future, a woman who had hunted and killed the elusive purple cheetah that once roamed the deserty plains beneath Pride Rock. "In the height of her bloodlust, she will skin it and make a bold shirt-dress to wear over Lindsay Lohan inspired leggings at Vancouver Pride, " said the mighty Zazu, before sipping his ice cold Zima zestily. "She will also skin a pack of Hubba Bubba and fashion herself a delicious purse."

Lady, in your lust for purple cheetah hide, you have forgotten who you are. If James Earl Jones was narrating the voice of your dead father, I shudder to think what he would say about all this.

What is the deal with animal print? Is it the straight woman's camoflauge? If that's the case, the only thing purple cheetah print blends into is a bad case of VD.

PS Did you forget about Zima? I didn't.

I'm waiting for the original cast of 90210 to run out from behind the camera and for Shannen Doherty to smash a bottle of "clear taste" against that blonde Zima model's face. Those were the days.